Bahir Dar – NABU has officially opened the Lake Tana Biosphere Reserve together with the Amhara Regional Government. After only three years of preparation by NABU and its partners, the region was registered as part of the global network of UNESCO biosphere reserves in june. High-ranking guests took part in the event in Bahir Dar, the regional capital on the shores lake Tana, including the Ethiopian president, Mulatu Teshome, the German ambassador to Ethiopia, Joachim Schmidt, and the director of the UNESCO-office in Addis Abeba, Prof. Dr. Alaphia Wright. 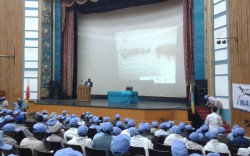 „The number and composition of the guests shows how important the Tana-region is for Ethiopia“, NABU’s vice-president Thomas Tennhardt said about the festivities. About 2.5 million people live in the 700.000 hectares of the Lake Tana Biosphere Reserve. They are dependant on agriculture and the ressources of the lake, which makes up about 50 percent of the country’s freshwater reserves and is one of the most important wintering areas for migratory birds such as the European crane. However, the lake and its surroundings are threatened by excessive use of the lake shore, erosion and plans for large-scale agricultural and structural development. „The goal was therefor to preserve one of the most unique natural and cultural landscapes of Ethiopia and to point out new, environmentally friendly ways of development for the local communities.“ said Svane Bender-Kaphengst, the head of NABU’s Afrika program.

NABU has been promoting knowledge acquisition and environmental education in the region since 2012 and is active in the restoration of wetlands and forests together with the local communities. It has also created new sources of sustenance and income for the people in the biosphere reserve through a pilot program introducing new agricultural methods, the development of regional products such as herbal teas, oils and vegetables and the promotion of ecotourism.

Lake Tana is not the first region NABU has supported in the establishment of a biosphere reserve: In 2010 the Kafa biosphere reserve was successfully established in south-west Ethiopia. The official recognition of Lake Tana as a biosphere reserve is the result of NABU’s project „For People and Nature: Establishment of a UNESCO Biosphere Reserve at Lake Tana in Ethiopia“, which was supported by Germany’s Federal Ministry for Economic Cooperation and Development (BMZ) and implemented in close cooperation with the Amhara Regional State and the Michael Succow Foundation. With the help of the BMZ, NABU plans to continue to support the young biosphere reserve for three more years with activities to preserve biodiversity and the climate, promote regional development and strengthen communities.

At the same time NABU is starting a new 4-year project in the forest biosphere reserves Yayu and Sheka in the south-west of Ethiopia together with it’s main consortium partner UNIQUE, on behalf of the GIZ, or BMZ respectively. The aim is to build capacities for an effective biosphere reserve management and to promote income-generating activities.

More Information about the NABU project at http://www.laketana-people-nature.com